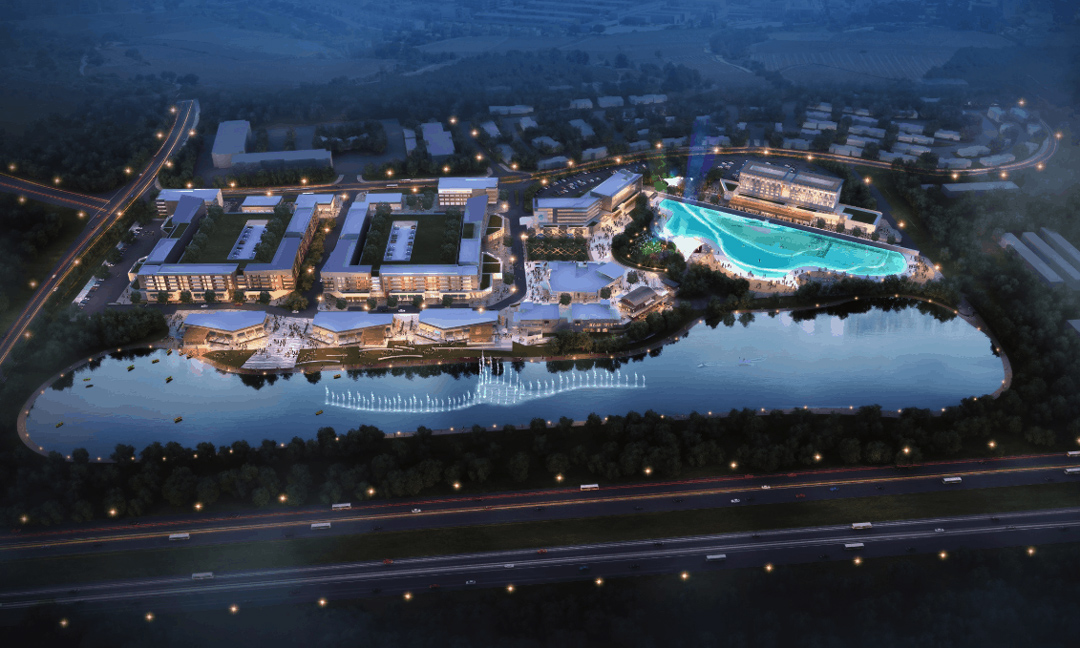 “Named simply, The Lake, the proposed 105-acre project reflects the lengths developers are going these days to compete for a generation of renters for whom just a pool and gym no longer cuts it. The development has been drawn up to incorporate 150,000 square feet of retail and entertainment, 100,000 square feet of office space, a 170-key hotel, 750 apartments, a 13-acre artificial Wake Lake, an amphitheater and a six-acre water park, capable of generating artificial waves large enough to surf.”

The first surf park on the East Coast – and supposedly the largest of its kind in the world – is coming to Chesterfield County, we’ve learned this morning. The 105-acre project, to be known as “The Lake,” would be a entertainment, retail, and tourism magnet, once developed.

From CoStar, who has the exclusive on the story:

A Virginia developer is planning a new mixed-use project in Richmond where the main attraction will be the first surf park on the East Coast and, upon its completion, the largest in the world.

Named simply, The Lake, the proposed 105-acre project reflects the lengths developers are going these days to compete for a generation of renters for whom just a pool and gym no longer cuts it. The development has been drawn up to incorporate 150,000 square feet of retail and entertainment, 100,000 square feet of office space, a 170-key hotel, 750 apartments, a 13-acre artificial Wake Lake, an amphitheater and a six-acre water park, capable of generating artificial waves large enough to surf.

Flatwater Cos., a firm that counts a real estate development veteran, an investment banker, and a construction manager as its principals, hopes to turn The Lake into a local and regional destination, hosting more 200 events per year.

“We’ve been working on [this development] for a handful of years, going through the permitting process, zoning entitlements,” Brett Burkhart, Flatwater’s director of project development and operations, told CoStar News. “Our firm was started with this project in mind.”

News of the surf park has been largely kept under wraps until now. With permits in hand, Flatwater plans to waste no time getting the development up and running, Burkhart said. The company expects to start construction in the coming months, with the first phase scheduled to open next fall.

“We anticipate having towards the end of next year the phase one component in place, which is the big lake and some of the initial restaurants and retail,” Burkhart said. “And then hopefully right around the same time the surf park will be coming on line, if not in spring of 2022. We’ve set kind of an aggressive timeline, and weather pending, we should be able to meet it.”

Flatwater isn’t ready to share its partners in the mixed-use venture, but for the surf park, Burkhart said the company is teaming with the group that helped build and operate a park for whitewater sports in Charlotte, North Carolina, as well as American Wave Machines, a company that developed the rolling water technology behind a smaller surf park in Waco, Texas.

“It is very much a capital intensive project,” Burkhart said about The Lake. “The amenities are large, expensive and rather unique. Our portion alone in construction will be over $300 million. [But] I really see this as the evolution of mixed-use development.”

Can Richmond Support It?
Roughly two hours inland from the Atlantic Ocean and bisected by the Interstate 95 corridor that runs up and down the East Coast, Richmond would seem an unlikely spot for a surf park.

The market is only the 45th largest metropolitan statistical area in the U.S., but the Virginia capital is going through a growth spurt. Richmond increased in population at twice the growth rate of the state and nation from 2010 to 2019, according to population estimates released this year by the U.S. Census Bureau, and the metropolitan area’s population has swelled to more than 1.3 million.

The Richmond area is also home to seven Fortune 500 companies, more than any metropolitan area of its size, and several projects headlined by the proposed Navy Hill development could push the region to new heights.

Its the Southern city’s location, though, that ultimately propelled the project forward.

“I believe one of the statistics that’s kind of unique to Richmond is we’re within a day’s drive of 50% of America,” Burkhart said. “And so we’re actually very accessible from a standpoint for people to take kind of a weekend trip to go somewhere that’s unique.”

Just as importantly, Burkhart said the developer needed a lot of land, at a more affordable price than what might be available closer to, say, Washington, D.C.

“We thought Richmond became a very compelling story,” he said.
The company found a site roughly 30 minutes southwest of Richmond in Chesterfield County, directly across from the largest artificial turf complex for youth sports in the country. The parcel sat at a major intersection, a critical component for Flatwater, and had a captured audience with the River City Sportsplex across the road.

Flatwater had its site, and started taking its project through the zoning and permitting process.

“That took us a little while,” Burkhart said. “We have a 13-acre manmade lake that we’re building, which doesn’t really fit into any of the traditional boxes for real estate development. So we had to write our own operating procedures, and basically write our own permits at both the federal and state level because development like this just doesn’t exist.”

As for the resident mix, Burkhart admits it’s “kind of cliche” but said he expects the “no-kids type” of millennials and baby boomers to make up the majority of renters. Though the belief is that the out-of-the-box amenities will pull in a lot of the families living in surrounding suburbs that you wouldn’t normally capture at a traditional mixed-use development.

“We figure about 20% of our traffic will come outside the Richmond region,” Burkhart said.

Burkhart said he expects residents of The Lake to primarily be millennials and baby boomers, but the entertainment components will appeal to families across the Richmond region. (Flatwater Cos.)

From Whitewater to Smooth Waves

A development in suburban Richmond with thousands of residences, an amphitheater, retail and entertainment space, offices and a 13-acre artificial lake, would already make waves. Though it’s the project’s centerpiece, a six-acre surf park dubbed Richmond Surf, that is likely to receive the greatest attention.

But it was another attraction that initially caught the team’s eye.
“We had started with a different component for the anchor. It was actually beginning with whitewater,” Burkhart said, an idea the company got from a successful development built around a whitewater sports park in Charlotte. That center sees more than one million people per year in attendance, Burkhart estimates.

Despite the success of the whitewater center, Flatwater kept coming back to the idea of a surf park. A surfing destination with customizable wave technology could be a headline-grabbing destination that could replicate a day at the beach and be advanced enough that it could potentially host international surfing competitions.

“We had some criteria,” Burkhart said. “It needed to be large enough to make it unique. It had to draw enough people to make it a compelling attraction for a mixed-use development. And it had to have enough capacity in order to eventually make the return on investment a feasible proposition outside of the development itself.”

There have been a handful of artificial surf pools built around the world, with various success. Though Flatwater wanted to move forward with a surf park, Burkhart said the firm had questions about its viability. The company didn’t want to put something in the middle of its development that might not be feasible from an operating standpoint.

The firm had liked the idea of a surf park. It just wasn’t convinced the technology was there.

In addition to the surf park, the development will include a 13-acre Wake Lake for kayaking, paddle boarding, cable water skiing and wake boarding. (Flatwater Cos.)

It wasn’t until the company saw a surf pool by American Wave Machines in Waco, Texas, that Flatwater knew it had its main attraction. Founded in 2000 by California surfer Bruce McFarland, the company uses its PerfectSwell technology to recreate natural ocean swells.

“When they flipped the switch and turned it on, it worked, and it worked fantastic,” Burkhart said. “That was the lightbulb moment.”

Richmond’s surf park is to be roughly twice the size of the Texas Surf Park in Waco and designed to host a variety of activities and amenities including outdoor concerts, beer gardens, food trucks and corporate events. Having control of the waves means the pool can also be set up for stand-up paddling, boogie boarding and beach recreation.

Richmond may not get beach weather all year around. But Richmond Surf will have the versatility to be a destination throughout the year.
“While there are plenty of indoor attractions available in the city, year-around outdoor venues are few and far between,” Burkhart said in an email. “We can change programming throughout the seasons to stay relevant and create events for our guests in, and out of, the surf pool. After all, there is no bad weather. There is just bad gear.”

As for the larger Lake project, Burkhart said it will be more than just a new development, but a truly unique destination unlike anything else on the East Coast.

And Richmond Surf? “That will become a positive and defining characteristic of our region.”