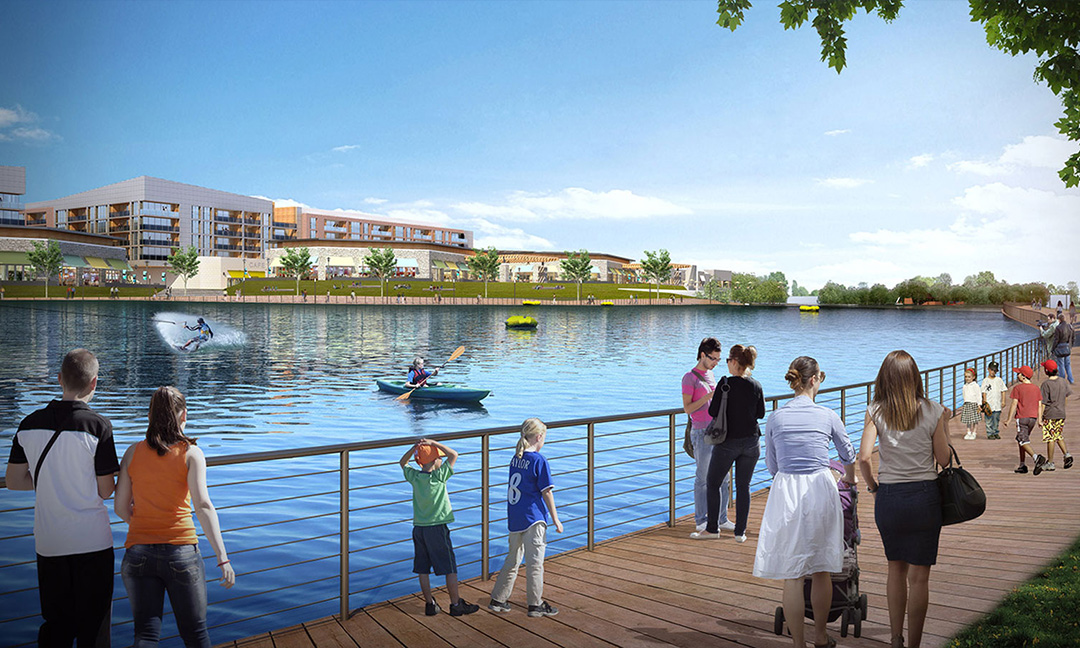 A developer is looking to make waves in Chesterfield County, enough of them to create what they say will be “a global surf destination” at state Route 288 and Genito Road.

The 105-acre site, which is next to the River City Sportsplex in the Brandermill area, will feature a 13-acre man-made lake where water skiers towed by overhead cables would glide along the surface.

Near the lake, a surf pool is planned that would generate waves for beginners as well as “world-class elite surfers,” according to American Wave Machines Inc., the company creating the surf pool.

Developer Flatwater Companies has launched a website that says the project will feature a 170-room hotel, an amphitheater, restaurants, more than 700 residential units, 100,000 square feet of offices, 150,000 square feet of retail and entertainment venues and “unlimited good times.”

Company officials reached this month were tight-lipped about the proposal other than referring to the website and saying that a groundbreaking is expected in the coming months. The project has been in the works for years, having received zoning approvals from the Board of Supervisors back in 2017.

Brett Burkhart, the Flatwater co-founder, declined to comment and referred questions to Andrew Ryan, a spokesman for the development, which is dubbed “The Lake.” Ryan said more details would be available closer to the project’s groundbreaking.

The fate of the property — which is on Genito Road in an area near Southside Speedway and Steam Bell Beer Works — has been in limbo as the project underwent a county site plan and state reviews.

County staff this month approved the first phase of the project, allowing the developer to start carving out the man-made lake and developing other elements of the plan, including an open-air amphitheater, a rock climbing wall, and sidewalks and trails around the water.

Subsequent county staff approvals are still needed for other parts of the plan, including the surf pool and housing units, said Jeffrey Lamson, a senior Chesterfield planner.

Scott Smedley, the county’s director of environmental engineering, said a key sticking point with the project over the years has been ensuring adequate water quality in the man-made lake.

“This lake didn’t really fit into any specific regulatory framework, and that’s a problem all around the country with these facilities,” Smedley said. “You basically have a body of water created without any real treatment standards governing how the water is being treated and filtered for people to be constantly exposed to.”

Smedley said the plan had to go through five separate site plan reviews. County officials had been seeking ways to ensure that pollutants from stormwater runoff would be adequately filtered from the water. The design of the main lake includes using a wetland as well as an aeration system to keep its waters clean, Smedley said.

“There was back-and-forth on the design of the facility, of the lake and the associated treatment of the water for the lake and how that was being handled,” Smedley said. “They’ve got their approval. They’re good to go.”

The project received its zoning approvals in 2017 for a mixed-use community with apartments, town homes, shops and entertainment venues. Back then, the project was a partnership between Burkhart and Derek Cha, the co-founder of the Sweet Frog frozen yogurt chain.

The plans, which back in 2017 included a whitewater rafting facility on the spot that’s now slated for the 6-acre surf park, were expected to cost about $250 million. Burkhart told CoStar News in an article this month that Flatwater expects to spend $300 million toward its share of construction costs for the development.

An online brochure said the plan is expected to draw “millions” to the site each year where more than 200 events are supposed to be held, including outdoor yoga sessions and international surf events. It would have the first surf park on the East Coast, the brochure says.

Supervisor Chris Winslow, who represents the Clover Hill District where the project is planned, said county and state transportation officials are looking at creating an exit from Route 288 south onto Genito Road to allow travelers a quicker path to the development that would bypass local roads.

Winslow said he thinks the project will give an economic boost to the surrounding area.

“I think people in Chesterfield who are looking for things to do on the weekend will find this attractive,” he said.